Great News! Learn how the apprenticeship and Kickstarter subsidies have been extended! 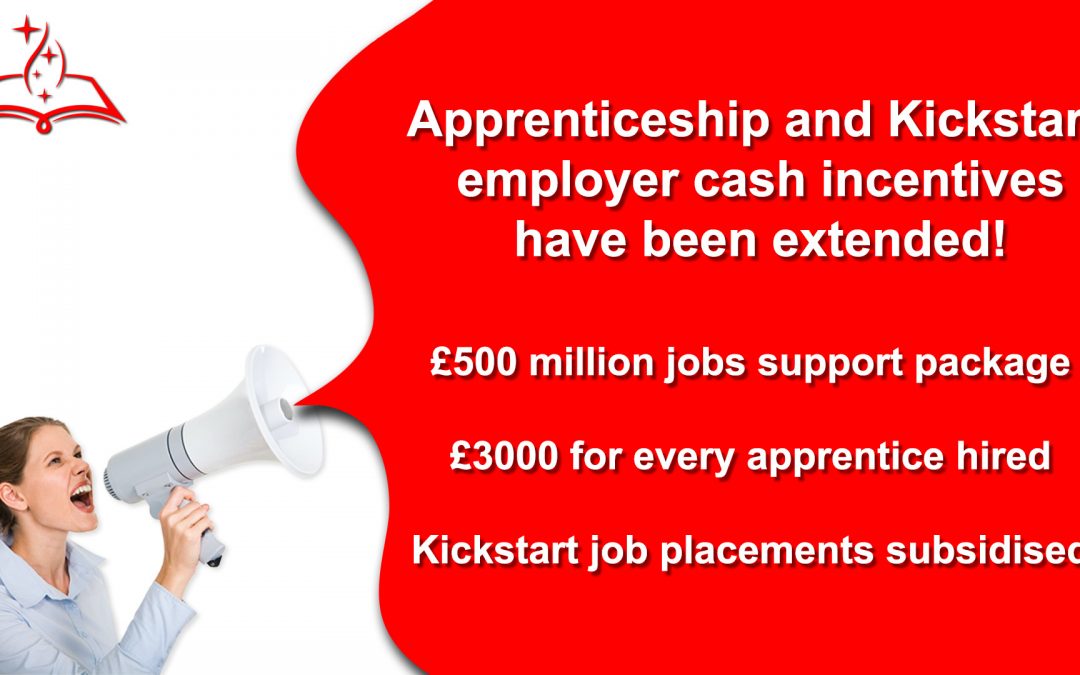 In a speech given at the Conservative Party Conference in Manchester on 4 October 2021, the chancellor Rishi Sunak announced that a £500 million funding package would be enacted to extend job support schemes.

What does that mean for us?

The job support scheme announced earlier this year was due to end on 1 October for Apprenticeships and 17 December for Kickstart. Due to this recent announcement both schemes have been extended until January and March 2022 respectively.

What do these schemes consist of?

If you were unaware, here is a quick break down of the job support schemes, which have now been extended:

The incentive payment is in addition to the £1,000 employers already receive for hiring an apprentice:

Employers of all sizes can apply for funding until 17 December 2021 to create jobs for 16 – 24 year olds on Universal Credit.

Why has the scheme been extended?

A progress report on the government’s July 2020 Plan for jobs has recently been revealed. The key findings include:

During his speech at the conference Sunak said:
“We are expanding our successful plan for jobs into next year. The Kickstart scheme, extra support through the youth offer, the job entry targeted support scheme and our apprenticeship incentives all extended because we believe in the awesome power of opportunity and we are going to make sure that no young person in our country is left without it”.

How can I take advantage of this support?

If you are an employer looking to hire using one of these schemes you can find more details about:

If you would like our support in this process or if you would simply like a conversion discussing you potential options you can:

This website uses cookies to improve your experience while you navigate through the website. Out of these cookies, the cookies that are categorized as necessary are stored on your browser as they are essential for the working of basic functionalities of the website. We also use third-party cookies that help us analyze and understand how you use this website. These cookies will be stored in your browser only with your consent. You also have the option to opt-out of these cookies. But opting out of some of these cookies may have an effect on your browsing experience.
Necessary Always Enabled
Necessary cookies are absolutely essential for the website to function properly. This category only includes cookies that ensures basic functionalities and security features of the website. These cookies do not store any personal information.
Non-necessary
Any cookies that may not be particularly necessary for the website to function and is used specifically to collect user personal data via analytics, ads, other embedded contents are termed as non-necessary cookies. It is mandatory to procure user consent prior to running these cookies on your website.
SAVE & ACCEPT